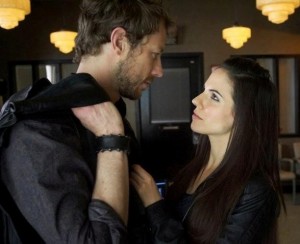 [Disclaimer: This post contains spoilers to Lost Girl episodes 3×07 and 3×09]

I recently got into the supernatural fantasy Lost Girl – and by “got into” I mean, methodically ran through the first two seasons on Netflix.  The show is reminiscent of Buffy the Vampire Slayer, all grown up – similarly campy, self-aware, entertaining and just great escapist television.

Lost Girl revolves around Bo (Anna Silk), a woman whose strange ability to drain the life from sex partners poses the threat of death to anyone she becomes intimate with – a predicament that prevents her from letting many people in.  She later learns that she is Fae – the umbrella term for an unending list of species and classifications.  More specifically, she is a succubus.  Heard of them?  Their PR person really dropped the ball.  But its not all sucking the life out of unsuspecting men on Lost Girl – there are girls too.  And she doesn’t have to kill.  She learns to control and channel her abilities – using them to the advantage of the Fae on many occasions and becoming their champion against the Garuda – the big evil they faced in Season 2.

The other main supernatural character and one third of the show’s compulsory love triangle is an easy-on-the-eyes wolf named Dyson (Kris Holden-Ried).  Rounding out the 180 degrees is Lauren (Zoie Palmer), a hot human doctor who is in deep with the Fae.

I give a lot of credit to Lost Girl for presenting a love triangle where both parties are on pretty equal footing. (Neither is hogging the covers à la Twilight). Season one was Dyson’s turn, season two was Lauren’s, and season 3 is turning out to be quite the crap shoot. It is actually one of the first love triangles I have seen on TV where I would not put money on the series’ ending.  I say this because I know I am about to say something that is going to be very unpopular with a good chunk of Lost Girl fans.  I’m Team Dyson (notice me ducking and avoiding flying objects).  Why can’t we all just get along?  All’s fair in fictional love and TV war, right?

I blame it on my weak spot for wolf shifters (kind of like a werewolf, but more cuddly), because that’s an actual thing, and they usually shift from hot guys with beards.  And, as someone who would hope my significant other would tell me when their ex is 50 yards away in a coma, there are also some things Lauren did in the first two seasons that didn’t sit well with me.  Plus, c’mon – Dyson went to see an evil Norn about a girl and was going to sacrifice his wolf for her – which is basically, I’m assuming, way more difficult than giving up a motorcycle or a sports car. And instead the Norn took his love for Bo – the most important thing he had (sigh).  And the whole ‘wolves mate for life’ thing? – I thought that was penguins, but I guess they don’t translate as well to the shifter community – not enough ice and too little speed or agility to make it a useful skill.

Regardless, I am really pulling for Bo and Dyson… Byson?  What are we calling them?  Doccubus has a fabulously catchy shipper name and a puntastic twitter hashtag (#docthevote) that won Bo and Dr. Lauren the EOnline Hottest Television Couple title.  Jeez, Valkyrie cop Tamsin has been on the show for five minutes and there are already people talking Valkubus or Copubus (Dyson was a cop first, people.  How did all five Bo/Dyson fans out there not snatch that one up?!) C’mon Team Dyson, get your ship together. I think I just saw a lone tumbleweed blow by.

Seriously, after reading enough of his tweets, I’m not even sure Kris Holden-Ried ships his own character. Team Lost Girl, it is.  I was losing hope – and then came episode 3×07 and episode 3×09.

In episode 3×07, Trick (Rick Howland) picks up on Dyson’s big secret after he doth protest… well, not at all.  (Hey, Wolfman, feel like playing some poker?)  He confesses that he did in fact get his love back, but would do the honorable thing and let Bo be with Lauren.  Before I had time to swoon over his nobleness – Trick, who methinks was wearing his ‘Team Wolf’ t-shirt under that short-sleeve button down, was quick to clarify that Lauren is a short-term solution to a long-term problem. Cue evil laugh.  Muahahaha.  He’ll toast to that. “Oh, Lauren? Pshhh, I’ll let it go for the short-term…Talk to me in 100 years when I’m still a smokeshow and Lauren is a pile of old bones.” In his defense, when you mate for life, you pretty much put all of your eggs in one basket.

In episode 3×09, courtesy of the Dawning, Team Dyson got a hallucinatory white picket fence fantasy and a confession of love that he will wait 100 years for Bo to reciprocate. It is also safe to say that Dyson wins the award for ‘Best Use of a Line from a 90’s Julia Roberts Movie.’  Kris Holden-Ried somehow pulled off: “I’m just a wolf, standing in front of a succubus,” and made it sound clever, self-deprecating and endearing in ways that seem completely improbable.  I’d sooner expect to see someone actually shift into a wolf than be able to make that line work.  (Maybe it was the beard?)

Alas, amidst the Dawning, we get an amazing love-confessing, life-sacrificing performance from Dyson, but in true Lost Girl fashion, it is Bo who has to woman up and save his ass.  She refuses to play by the rules, finds her own path, and brings Dyson back to life.  It’s a Succubus miracle!

Now, Dyson’s got nothing but time, people…unless he dies again.  Which I hope does not happen because — you saw Twilight and True Blood — wolves do not typically get the girl, and I am really pulling for him.  But like the moral suggests: if you can’t beat ‘em, wait ‘em out until they die — and then steal their woman.