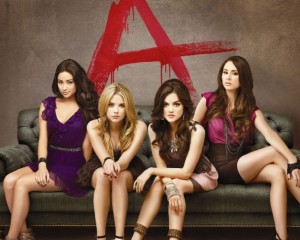 Your third season finale has me a little confused. I apologize, I don’t do hallucinogenic drugs, so I couldn’t really follow this last season. Toby’s bad. Toby’s dead. Toby’s alive. Toby’s good. Toby’s good, pretending to be bad. The only thing I did buy was Spencer’s recent catatonic depression – now that is what someone being pursued by a psycho killer with no where to turn looks like. Not wearing a blazer and studying for a chem test. This isn’t Constance Prep.  You’re not meeting Blair on the Met steps for yogurt; someone is trying to murder you.  I think it’s okay to let yourself go just a little.

But, look, I mean no disrespect.  I have been a fan of yours for some time.  I started watching in the first season, even after I realized I was significantly older than your target demographic. I like a good teen drama as much as the next girl in her late twenties who needs something to watch that her and her cats can all agree on.

I typically take your fashion choices in stride. Albeit, sometimes I question Aria’s over-the-top ensembles, but I trust you know better than I what the kids in suburban PA are wearing these days. Kudos to the girls for keeping their shit together.  I know when I was 17, it took a lot less than some crazy person digging up corpses and mailing me an earring from the casket for me to dip into my comfy pants drawer.  And yet Aria is wearing – wait, did a rabid animal attack those leggings?

I get it, people in sweats, who are too afraid to shower or leave their house would pretty much turn the show into an episode of Hoarders — and been there, done that — so I let it slide.

Fashion faux pas aside, I sincerely appreciate your intricately linked cast of smarmy characters.  How can we possibly guess who A is when the most trustworthy character on the show has spent the last three seasons engaging in some pretty illegal dating habits.  And, you know what?  It could be Ezra. I’m not making any promises.  I mean, you even had me believing it was Byron for a minute.  Byron?!  Although I think I was more surprised than Aria to learn that he may have been involved.  For someone who just found out her dad might be a murderer, she remained pretty even-keeled.  But of course, it wasn’t Byron. That would have just been silly.  So who is it?  Do the writers even know?

It’s starting to remind me of another little show I used to watch, called Lost…

So, please, Pretty Little Liars, don’t screw this up.  I have been eating up everything you have given me for three years, without questioning your motives or intentions, like I am in an unhealthy relationship with my television.

I get it.  It’s hard being a successful show.  You throw the balls in the air, and with each season there are more balls.  But here’s the thing that I learned from the show above:  They say “go big or go home” – well, I say, “go big, or only go medium-sized and wrap up all your loose ends.”  Not as catchy, sure, but it will save a lot of fans from turning into that sweaty guy wearing the sandwich board and talking to himself in the subway.

The more seasons the show goes, the less likely everything will be able to be explained logically.  And I think I’ve been pretty understanding.  So here’s my deal breaker.  You can screw up with A.  I don’t care who it ends up being.  Bring Allison back, make Toby bad for the 87th time, Jason, Melissa – how about that Pastor Ted, he looks a little shifty.

But there is one little thing I am going to need explained.   How is A, whoever that may be, doing it?  No big deal, just the basic premise of your entire show.  I’ve suspended a lot of disbelief for you guys.  A can’t know everything that each of the girls is doing, saying, texting, all of the time.  Unless the show is about to take a supernatural turn or A is actually a sleeper agent conveniently stationed in Rosewood, I don’t care how many people are playing for the A team – it just couldn’t happen.

If they can sufficiently explain that, then for all I care, A could be a trained monkey who escaped from a traveling circus passing through Philadelphia and was offended by Aria’s choice in shoes.