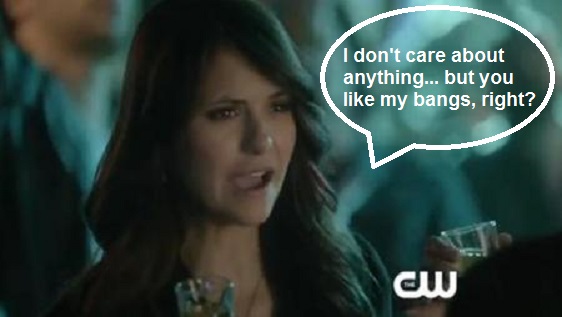 1. The Vampire Diaries has BIG News. For the last couple months, the internet has been abuzz with anticipation over a big change coming to The Vampire Diaries.  Sure, they are killing off practically every main character with reckless abandon (RIP Jeremy’s arms), but that is not what we are talking about.  Ever since Nina Dobrev showed up at the SAG Awards in January with a new look, rumors have been swirling.  Last week, executive producer of TVD, Julie Plec even joked on Twitter: “next week, the great hair change of 2013 :-)”  Hey guys, she got bangs, she didn’t shave her head. And they are side bangs. Are those even real bangs?  They are quite flattering and all, but everyone needs to relax.  This is hardly Felicity.  Bonnie got bangs at one point too, people.  Remember?  No? You guys are gonna give Kat Graham a complex.

2. Dance Moms Takes on Civil Rights.  Can a white nine-year-old girl accurately portray Rosa Parks? That was the big question on Tuesday night’s episode of Lifetime’s Dance Moms. Thankfully, the answer is no, but that didn’t stop helicopter mom Jill trying to convince Abby otherwise. Instead, Holly’s daughter, Nia was awarded the part, and the dance won first place beating out their rivals, The Candy Apples. Last week’s theme was based on the defunct military law “Don’t ask, don’t tell.”  Abby is clearly bringing out the big guns this season. No pun intended. What could she possibly come up with for nationals? We are a little scared to find out.

3.  Amanda Bynes is Batshit Crazy.  Hey guys, have you heard about Amanda Bynes?  Well, she has either lost her &%$#&@$ mind or we are in store for a sequel to the Joaquin Phoenix fake out of 2010. We’re thinking “I’m Still All That” as a working title for the documentary, but we’re just spitballing here. While she hasn’t done much acting lately, she has been spending some time on Twitter. Follow her if you want to read random strings of words, see multiple pictures of her in sunglasses and winter hats, or perhaps are a psychiatrist who can offer her some assistance.  She recently tweeted some pretty explicit instructions for rapper Drake, but if he learned anything from his Degrassi upbringing, he will politely decline – or at least buy her dinner first.

4. Time Traveling with Workaholics. Beware of 2014 because “The Future is Gnar!”  In the season finale of Workaholics, Blake, Anders, and Adam (everyone’s favorite co-workers) travel to the future of TelAmeriCorp, and it’s not pretty (literally). The boys set out to take down the evil computer program, Tina, and her accomplice, their manager, Alice. Thankfully, they save the company and their jobs (at least for the immediate future since the program won’t go into effect for a couple years). The best part of the episode? Tom Green makes his way back on our television screens as the unlikely “boss” of this crazy video game. How much longer until next season?

5.  Jess and Nick Forever Ever.  If anything brightened up our television screens this week, it would have to be Jess (Zooey Deschanel) and Nick (Jake Johnson) on New Girl.  We are loving their socially awkward flirting and just all around quirky adorableness – and c’mon, his zombie detective novel starring sidekick, Jessica Night (no relation to Jessica Day, of course).  We thought we were going to have to wait another couple seasons for them to finally seal the deal, but if we have learned anything from every other television show, it’s to enjoy it while it lasts – because we know New Girl is going to be on for awhile, which only means a rocky road ahead for our favorite oddball super couple.