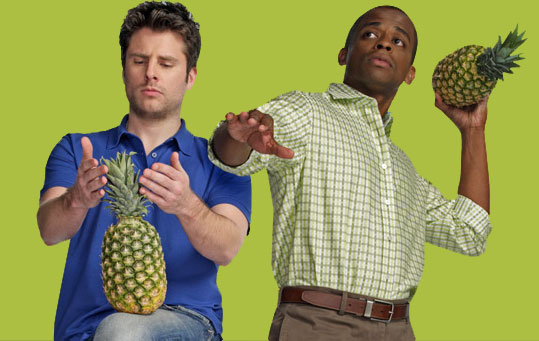 I don’t know if I should be copping to this in such a public forum, but I am not ashamed to say that I am a fan of Psych.  The television show, not the college major or the 90’s slang.

And I am not alone. The USA Network recently held a live all-night Psych marathon and people were tweeting into the early morning hours.*  A few even tweeted pictures of Psych themed tattoos.  Real tattoos.  Unless they were fake.  Psych.

Yet, somehow during its 7 seasons people have seemed to become divided into Psych fans and really adamant Psych naysayers.

It’s like those people who say, “You either love me or you hate me, there is no in between” – No, if you say that I am pretty sure everyone just hates you.  So maybe it’s not like that.

But at this point, it seems that telling the wrong person that you like Psych is like telling someone you listen to Nickleback.  Don’t do it.  Aside from the fact that I don’t like Chad Kroeger’s face, what offenses have they actually committed?

But I get the Nickleback thing, although please don’t check that old trapper keeper of CDs, there is nothing to see there, nothing at all.

Top 10 Reasons to Give Psych a Chance

1. James Roday. How can you hate him?  I mean, even if you don’t think he is the best thing to happen to basic cable, he is funny, he writes, he directs, he loves 80’s movies and friendship and probably puppies. That’s his Match.com profile right there, and I was sold at 80s movies.

2. The ensemble cast is by far one of the best on TV.  Corbin Bernsen, Kirsten Nelson, Timothy Omundson, Dule Hill, Maggie Lawson, the guy that plays Woody the coroner (Kurt Fuller).  I mean, watch The Hangover spoof episode and tell me differently.

3.  They do not take themselves too seriously.  It is basic cable comedy, and they know that. They aren’t trying to be NCIS.  It’s not meant to be taken seriously.

4.  The central relationship is one of the cutest couples on television.  And I am obviously talking about Shawn and Gus here.

6. Pineapples.  For some reason, they like them and hide them in each episode.  So even if you are unimpressed by the plot line, it’s still like a live action Where’s Waldo.  I’ve watched shows for less.

7.  Sometimes you just want to spend your Sunday afternoon nursing a hangover and eating pizza from your bed. On those days you are not up for the exposed innards and hemorrhaging flesh of The Walking Dead, and in those particular instances Psych fits the bill.

8.  The cast has nothing but nice things to say about you.

9. The theme songs. Plural. Because sometimes they match the theme song to the episode, and sometimes Boyz II Men or Tears for Fears sings it.

10. The spoof episodes are always entertaining.  From Hitchcock to The Hangover to Twin Peaks and, of course, the most recent homage to Clue, complete with singing telegram girl.  But nothing beats the vampire-themed “This Episode Sucks,” if only for Gus’ True Blood impression: “Sookie is mine.”  And of course, the original Buffy the Vampire Slayer (Kristy Swanson).

So, look, I don’t care if you don’t watch it.  Maybe Simon Baker ruined fake psychic detectives for you – no need to rain on our parade.  But unless Chad Kroeger guest stars and Nickleback sings the theme, just leave us be on Wednesday nights at 10.

* I read about it online the next day, of course.