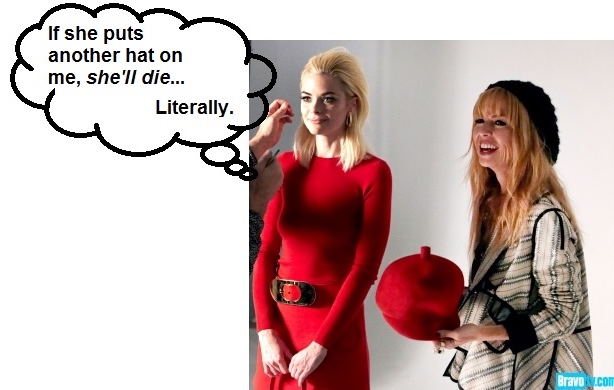 1. New Girl hits the guest star jackpot so hard you’d think it was sweeps. If we thought New Girl couldn’t get any better, this week we got to see where Nick comes from — and it did not disappoint. Nick Kroll of The League makes a perfect appearance as Nick’s idiot brother (referring to Nick, who’s not really known for his smarts, as “College”) and comedian Bill Burr guest stars as Nick’s cousin, a Boston TSA agent who comically butts heads with Schmidt.  While the episode itself centers around a trip to Chicago for Nick’s father’s funeral, the casting choices made a comedic gem from what could have ended up a somber affair.  Also guest starring Ellen Abertini Dow, better known as Grandma Cleary from Wedding Crashers, the episode was New Girl at it’s best.  And, c’mon, who didn’t enjoy watching Nick’s mom give the consistently adorable and always lovable Jess, a little bit of a hard time? (By Amanda)

2. Guys, The Good Wife is good. Again.  I never talk about my relationship with The Good Wife because I feel the mere mention of it puts me in the 40-65 demographic.  And I don’t want that to be true, because this show can be amazing (even if it is on CBS).  This week’s episode took place entirely on St. Patrick’s Day with a formal event and no courtroom scenes.  John Noble (of Fringe fame) guest-starred but is shot and killed on the street and the cops want Alicia (the wonderful Julianna Margulies) to tell them who did it.  I don’t even care who did it — it doesn’t matter —  but the scenes with Noble and Margulies are great.  It’s too bad he was killed off so quickly, I’d love to see him come back.  In the relationship department, Will and Alicia are totally over for good.  Totes.  For sure.  Because she’s back with her husband, Peter (Chris Noth/Mr. Big).  Riiiight.  I’ll read between the lines here: she’s back with her husband because he’s running for Governor of Illinois and needs a wife to stand behind/next to/near him.  But that won’t be forever. (By Cara)

3. Are They Ever Getting Back Together? This week on FX’s Archer, ISIS is sent to Rome to protect the Pope from a suspected murder scheme. Of course, nothing goes as planned until Archer saves the day by putting a flare into the gas tank which blows up the terrorist’s car. However, the best part of the episode was Archer’s reaction to Lana, an agent and former girlfriend, getting shot. Sterling Archer is known for his egotistical, narcissistic behavior so the panic and desperation in his voice when he thought Lana might be killed was strange to see. It makes me think the writers are trying to get these two characters back together, but only time will tell.  (By Kyle)

4. Is this Cure Thing Over Yet?  Per usual on The Vampire Diaries, Elena has half of Mystic Falls running around trying to save her, while there are people in my life I hope to never be on fire near. And I think that all of the remaining characters on the show are equally exasperated by these grand gestures. There are few humans left in the main cast — and I don’t think any of them has ever been given a chance to complain about their lot in life.  Can we just end this pity party already?  Elena’s a vampire, like almost every other character on the show.  What makes her deserve the cure more than any of the others?  And whose right is it to make her take it? Give it up, Salvatores. What kind of example are you setting for the teen viewers if the moral of this season is trying to change someone to fit your ideal?  The whole repetitive doppelganger love triangle is creepy enough.  Sure, we’d rather not see Elena snapping necks — but at least she is putting her foot down.  And that should count for something. (By Amanda)

5. Rachel Zoe or Brad Goreski. Who Would You Choose? Wednesday night is now fashion night on Bravo featuring The Rachel Zoe Project, It’s A Brad Brad World, and Dukes of Melrose. I only tune in for the first two shows, and it got me thinking who would I rather style me? Just to refresh, Brad Goreski was Rachel Zoe’s employee, who decided to leave her company and start his own, causing a major rift in their friendship.  However, every time I tune into The Rachel Zoe Project I am constantly annoyed by her voice and her “Zoeisms” — “maj” or “I die” or “babe.”  On the other hand, I would love to hang out with Brad. He is outgoing and eccentric, but at the same time very relatable and easygoing. But to style me…I’d pick Zoe every time. She did an amazing job styling Jamie King on her 60’s inspired Instyle shoot and picked pieces from Louis Vuitton, Marc Jacobs, etc. that really captured the 60’s fashion era. Rachel Zoe posted the spread on her Instagram account. I mean “I die.”  For a laugh, check out Amy Phillips’ impression of Zoe and many other Bravolebrities on her YouTube channel.  (By Kyle)

Let’s Just do this Zombie Apocalypse Already. So apparently something big happened this week on AMC’s The Walking Dead.  Unfortunately, I can’t talk about it because I’m only half way through Season 2.  Despite trying to avoid spoilers, I’ve stumbled across the news of the death of a character I was not even aware was still alive — so there’s that.  One of the great things about this show is you never know what is going to happen.  And it put Norman Reedus back on the map in a huge way.  Just this week he was on a mission to save a little girl, impaled himself with an arrow, made his own tourniquet by ripping the sleeves off the one shirt he owned that still had sleeves, and then shot a zombie in the head with the same arrow.  Ok, ok, so that was this week for me.  But I am sure he did something similarly badass last Sunday.  Despite its popularity, job security does not seem to be one of the perks for actors signing on.  This coming Sunday is the finale of the third season, and then I will have plenty of time to catch up. Just, for the love of kittens and rainbows and sunshine, don’t kill Daryl. (By Amanda)