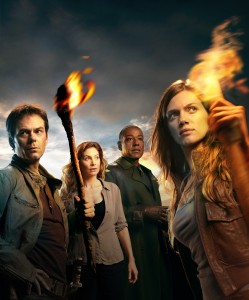 We lived in an electric world. We relied on it for everything. And then the power went out. Everything stopped working. We weren’t prepared. Fear and confusion led to panic. The lucky ones made it out of the cities. The government collapsed. Militias took over, controlling the food supply and stockpiling weapons. We still don’t know why the power went out. But we’re hopeful someone will come and light the way. (Episode,1 Introduction)

NBC’s Revolution is an American post-apocalyptic television drama that started in fall 2012, and is already in its second season. The show revolves around a young girl, Charlie Matheson, and her family living in an America where all the power has been turned off for 15 years. In her quest, Charlie finds her estranged Uncle Miles, played by Billy Burke, a high ranking ex-general of the Monroe Republic. In each episode, the audience learns more and more about why the power went off and what happened in the last 15 years without it.  Still, it is a show that often leaves you with more questions than answers.  Aside from the obvious concerns, here are ten of the questions that I need answered.

1. Why kill off Charlie’s brother?

Last season on Revolution, Charlie went searching for her brother, Danny, after he was captured by the Monroe Republic. The Monroe Republic represents a militia formed in the Northeast section of the United States, claiming Philadelphia as their capital. It was shaped by Sebastian “Bass” Monroe and Miles Matheson during the chaos that erupted after the power went out. Throughout the entire first season, Charlie was on a search for her brother, who she finds, but ends up losing in the first episode of season two. Why kill off this character? The entire last season we were routing for Charlie to find her brother, but in the end, she loses him anyway and gains back her mother, Rachel, whom she thought was dead. To me, this isn’t a good enough conclusion to all of Charlie’s hard work last season.

2. What is the relationship between Miles and Rachel about?

Meet Rachel Matheson, wife to Ben Matheson, mother to Charlie and Danny…and ex-lover to Miles Matheson? For the past 10 years, Rachel has been missing from her family’s lives. In a flashback, the audience sees Rachel reluctantly leave her family and presumably left for dead.  However, we find out that she was alive the entire time and only held captive by Sebastian Monroe in Philadelphia. Now, here comes the tricky part.  There are many scenes of sexual tension between Rachel and Miles, her husband’s brother. This leads me to believe that they use to be an item. Oh yeah, and that steamy make-out session between the two of them didn’t hurt my campaign.

Now, after seeing this steamy make-out session, it leads me to believe that Miles could be Charlie’s real father. The relationship between Miles and Charlie is very awkward. He seems invested in Charlie, like a father, but at the same time keeps his distance from her. Either he has really bad communication skills or something is going on there. Also Rachel tells Miles to take better care of Charlie than he ever did of her. WHAT DOES THAT MEAN!?!?

4. What horrible things did Miles do to Rachel under the Monroe Republic?

In every episode this season, Miles or Rachel will vaguely mention what a horrible person Miles was under the Militia. However, they refuse to let the audience know what exactly are these horrible things. Did he torture her? If so, then that steamy make-out sesh is becoming more and more creepy.

5. Is there a reason Charlie has less of a role this season?

Last season Charlie was the central character of the show. Although I do cringe every time she looks upset, it seems weird we don’t hear her speak often.  I know she is upset about her brother dying, so it makes sense that she is entering into this rebel phase (pun intended), but give the girl some lines. Also, she is really pretty for living without power for 15 years. If I go 15 hours without power I look like the grim reaper, so please explain me that, NBC?

6. Are we really taking the supernatural route?

I really enjoyed that this show was based more on science than supernatural. Now I love a good supernatural show, don’t get me wrong, but I don’t feel that this show really needs it. However, in last week’s episode, we meet Jane, a member of Rachel’s research group. Jane saves Rachel from two militia men by using some weird power light supernatural device that burned the two men alive. Jane reassures Rachel that it wasn’t supernatural, but instead had to do with the power source necklace they each possess. Are you starting to get confused? I don’t blame you.

We now know who started the blackout: Rachel and Ben Matheson, along with their research team, but we want to know why? Jane gives us some more information (I mean, it’s like pulling teeth with this show), by indicating that her wife will die if they turn the power back on, and the same would have happened with Danny if he hadn’t gotten shot. So now Rachel is determined to get to “the tower” to turn it back on. I have no idea what it is, where it is, or what she will have to do, but she said goodbye to Charlie like she would never see her again. Does this girl have abandonment issues or what!

8. Do we really believe Billy Burke as the ‘badass’ character?

Billy Burke (yes, Bella’s father) plays “badass” Uncle Miles who was in the military until the blackout. When the power went out, he was left in his car with his best friend, Sebastian Monroe, and they decided there had to be some type of law enforcement to control the masses. This ultimately took the shape of the Monroe Republic, and well, you know how that went (at least I hope so).  Although we know very little of Miles time in the Monroe Republic, his reputation as a general is known everywhere, making Charlie suspicious of the type of man he is. Uncle Miles is a lethal sword fighter and knows how to kill, but does he really have a heart of stone? I don’t see it yet, but now that he signed up for the Georgian army maybe we will…

9. Why is the northeast living in the 18th century, where as, Georgia resembles the early 21st century?

Being a native of the Northeast, it hurts my heart to hear that the entire tri-state area crumbles after the power goes out. I mean, it does make sense, there are five different major cities all within 12 hours of each hour and without power they would all collapse. On the other hand, Georgia thrives during the blackout. Atlanta is a fully functioning city by using steam to power their trains, cars, and other devices. There’s fashion, culture and wealth reminiscent of the early 21st century? Now why does the Northeast have to live in such despair and misery? Miles explains to Charlie the reason the South survived so well was the weather, crops, and their ability to cope with the blackout. The North lacked all these resources and had to revert back to candlelight and muskets. So, I guess moving to the South doesn’t sound that bad anymore?

10. Finally, what the heck did Rachel take out of Danny’s body?

After Danny died, Rachel went to go see her son’s body. As she sobbed, Rachel tore open his abdomen to remove a small pill shaped device, which we later find out kept Danny alive as a child. So how does this device work, and does it relate to the power going out?

Hopefully, one day we can learn the answers to all of these questions.  Let’s just hope the show does not get canceled first.

3 thoughts on “10 Questions We Wish Revolution Would Answer”