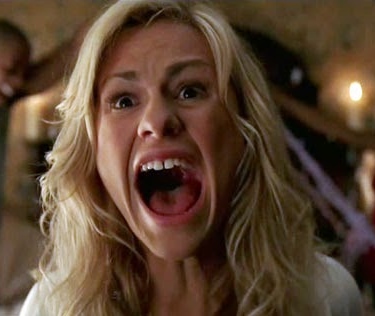 My biggest problem with the True Blood finale was not what you may think. Sure, it was a little slow paced and had a tragic lack of Viking abs, but my main problem was this: on a show that lauded differences, pushed the metaphor of “embracing your light” to dramatically literal proportions, and made a central theme of the equal value of all relationships, the ending paid a surprising amount of lip service to the idea that the purpose of life is procreation.

The epilogue of the finale, four years after the events of the show, finds a Thanksgiving celebration straight out of a Hallmark card, with special attention given to Jason, now married to Bridget, who judging by their brood of children, has spent the last three years reneging on “not having sex” and solely making babies. Sam is there too, with his new family in tow, kids are running around the yard, and Sookie is very pregnant.

Once seated at that Rockwellian holiday table, it was admittedly hard to concentrate. The clock was ticking down to the show’s final moments and viewers surely spent a significant amount of this time on the edge of their seats with a mentality akin to watching an episode of Maury Povich. Non-descript, bearded rando, you are the father.

Isn’t that nice? Sookie put her vamp-loving ways behind her, reformed, met a nice “normal” man who can grow facial hair and walk in the daylight without setting himself on fire. And of course, he’s virile, because isn’t that the whole point? It doesn’t matter who he is, because she can bear him lots of human(ish) children.

And that is my problem. For seven seasons, this show has viewed all types of relationships as equal. Sure, vampire/human relations were discriminated against, but that was wrong, like any other discrimination. Over the years, True Blood easily became a battle cry for marriage equality. After all, as Andy states during Jessica and Hoyt’s unrecognized-by-law marriage ceremony: “love is love.”

As much as I prefer Sookie ending up with some faceless human caricature (whose sole function thus far has been impregnating her and carving the turkey) to her ending up with Bill, I think both endings are (or would have been) significantly flawed.

From the beginning, the show framed Bill and Sookie as the central relationship, but I (and a large percentage of viewers) never bought it. For those of us who read the books, Bill was a minor character at best, and it was Eric and Sookie who ruled the pages. While Alexander Skarsgård embodied the role even better than anyone could have possibly hoped, ultimately it just had more to do with the characters themselves. Bill was a two-dimensional bit player, meant to pique Sookie’s vampiric curiousity. The show took this character and tried to expand him into a long-term love interest, but let’s face it, his brooding, old-fashioned martyr was a bore to watch, and ultimately he came across as rigid, controlling and selfish.

Asking the woman he supposedly loved to kill him like a fairy Dr. Kevorkian? And use her light up (on him, no less), so she can have a “normal” life. She could throw her light into a tree trunk for spare firewood if she didn’t want it; she didn’t have to watch him die. But, as he climbs into his human grave and finds a picture of his daughter, it comes full circle.

Bill is all about dying because life should be one way (something along the lines of being born, getting married, bearing children, maybe seeing your children have children and then dying – Sadly, I am only loosely paraphrasing here.)

Yet, as we look around that Thanksgiving table, we see all types of relationships represented. Jessica and Hoyt. Arlene and Keith. Lafayette and James. For various reasons, none of these pairings will result in biological offspring. That doesn’t mean they won’t have children or families, if they so choose.

Bill’s emphasis on Sookie being a mother, and defining this motherhood as conceiving a child naturally with a human father, is a disservice to a groundbreaking television show that emphasized the many faces of relationships.

Because, logically speaking, if the show had continued or the epilogue had gone further into the future, wouldn’t vampire and human couples have been shown creating families of their own through adoption or surrogate? While Hoyt made it conveniently clear that he doesn’t want children, making his union with Jessica a non-issue for this line of thinking, I like to think Lafayette and James will have a family someday.

Personally, I would have preferred an ending where the person taking the head of the table was a supernatural – I would have liked it to be Eric, but would have even been okay if it was Sam. The human man has a beard, so if television tropes are to be believed, he could be a werewolf, but sadly, I do believe that we are meant to assume he is human. That the show comes to a close by contradicting its core message – putting a misplaced value on the conventional idea of “normal.”

Maybe Sookie can use her light to cook a casserole and warm her bare feet on that cold kitchen floor.