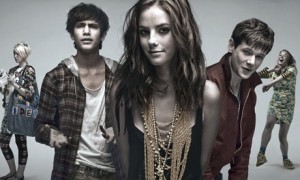 “Damaged people are dangerous. They know they can survive.” – Josephine Hart

There was something that drew me to the British teen drama Skins.  It was gritty and intense, approaching issues in a way that wasn’t sugar coated and didn’t always end with a convenient lesson and a well-timed group hug. Because sometimes in life shit just happens. And it was refreshing to find a show about teens that are not thirty-year-old men masquerading as high school sophomores.  I’ve heard the show be described as realistic, and while there are parts of it that are extremely indicative of contemporary youth culture, if it is real, there is something horrific to be said about the current conditions of adolescence that is noticeably absent from the CW Network.

Realism in teen drama is a sliding scale, and like acne-prone snowflakes, no two teen experiences are exactly the same. Certainly, the CW’s watered-down adolescents — with immaculate work ethic, an intrinsic respect for one’s parents, and a sense of direction that I envied well into my twenties — is batshit crazy.  But then again, Skins might be a little too gritty to be widely relatable. As with everything else, the truth lies somewhere in the middle, but for better or worse, the average youth of the last twenty years or so resembles Skins a lot closer than it would Dawson’s Creek or 90210. 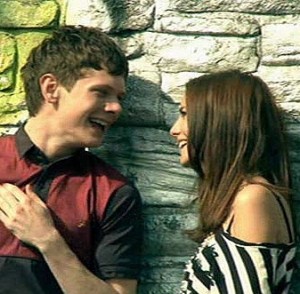 Skins is a dramatized reality, an artistic representation of the inconsistencies evident in being a teenager. It might not be reality, but the emotions are real — the confusion, the hopelessness, the changes in mood, and ideas about the future.   Everything is intensified, magnified – and isn’t that the truth about high school? Isn’t that the whole point? Each experience is different, but that feeling of being lost, of clawing your way through the unknown and in the process finding some semblance of yourself, is the same — regardless of what counterproductive journey you traversed to get there.  The boredom, the hope, the aggression, the feelings, the numbness, the wanting to feel something?  Unlike 90210, Dawson’s Creek or One Tree Hill, the teens of Skins are not miniature adults with their futures mapped out and their love lives easily defined.

For those who didn’t watch, or haven’t yet caught up on Netflix, Skins follows a group of students through two years of high school.  The show originally ran for six seasons (beginning in 2007), with a new cast (or generation) every other year. Each season is further divided into episodes that, for the most part, focus predominantly on the perspective of a single character or pair of characters.  If you haven’t seen it, I suggest you stop reading and watch. This love letter to Skins contains spoilers to the events of the second generation (seasons 3-4). 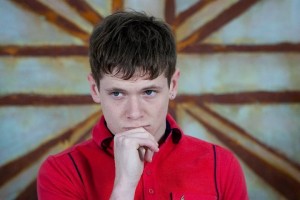 The Rise of Cook

While each generation is worth watching, the second generation was by far my personal favorite. The central storyline begins on the first day of school with a hot mess of a girl named Effy meeting a tight-knit group of friends: Pretty boy Freddie, sidekick JJ, and troublemaking joker Cook.

Effy is both instigator and innocent bystander to the mayhem she wreaks on Freddie and Cook’s friendship, and she is a catalyst for Cook, who from start to finish is one of the most perfectly executed characters on television.

Cook begins the first season as the rebellious class clown who pulls his pants down in an assembly, has no sense of consequence, respect, or decency.  He is who he is, and we’d all pretty much be lying if we said we didn’t know a Cook or two back in our own high school days, and we’d probably be lying still if we said we didn’t find aspects of it attractive – because at 17 the things you find attractive are all the things you tuck tail and know enough to run from now.  And for all those reasons Cook begins on a high note – life of the party, always a good time — he’s a little shit and we all know it, but its absolutely entertaining to watch.

In the first episode, Effy challenges the boys to break all the school rules – first one to complete a list of unlawful tasks gets what each of them has wanted since 8 o’clock that morning.  Cook, true to form, zips through the list faster than he can unzip his pants – which is pretty fast – and Effy and Cook break a couple more school rules in the nurse’s office in a scene that has your running to IMDb immediately after to see how big a creep you are. (Medium-sized, it turns out.) 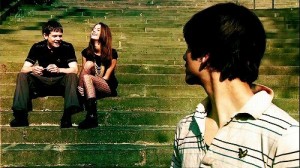 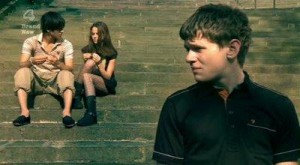 And in the end, there is no big shift.  Cook doesn’t grow up, find direction or get his shit together.  There is a love confession in the rain, but it’s cynical and self-reflective – the show at its best. He is still a teenager and a f*ck up at that.  He is in love with the wrong girl, he’s on the run from the law.  You feel more for his character as the series progresses, but you can’t really say he’s come that far.  And then, in the the last scene of the last episode, it hits you all at once: how gorgeously this character has been conceived — leaving you floored, speechless, and absolutely blown away.

In the series finale (S4x8), Freddie is missing – we know he’s been murdered, but everyone else believes him to have left on his own – and Effy holds a birthday party for him in his shed. Cook sees a figure in front of Freddie’s house and follows him to a basement, where he is confronted with a bag of Freddie’s bloody clothing. With little time to process what has happened to his best friend, he is confronted by his killer, Dr. Foster. The exchange is perfect, and even if you don’t plan on watching the show, this 3 minute scene encapsulates what is so incredible about the series.  You take this kid, this stereotypical stock character, and show all the small details of his life, the out-of-his-control things that happened to him, and all of the trouble he has created for himself. and you ask yourself, why does it matter?

But when the doctor, baseball bat in hand, tells him to kneel down, he won’t do it. He won’t submit. Because that’s not Cook and never was. And that’s why it matters. When he is hit, he gets up laughing, smirking like he did in the first-day-of-school assembly.  He hasn’t changed, he’s still the mindless hothead that he has always been. When the doctor tells him: “You’re nothing, you don’t deserve that girl,” he agrees. He spits back the stereotypes, saying: “I’m just a stupid kid.  I got no sense. I’m a criminal, I’m no f*cking use…I’m nothing.” 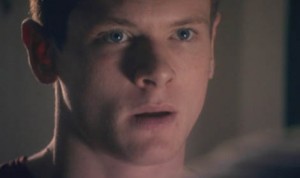 In the end, he controls what happens to him, owns it, and turns the stock character stereotype back on itself.  And that’s not saying it’s not true, because maybe it is.  But in those final moments, is that what defines him?  He won’t kneel, he will go down fighting — for Freddie, for Effy, and for himself. He is who he is, which is something we all learn about ourselves eventually. “I’m Cook,” he decrees, before lunging at his friend’s murderer, screaming it: “I’m Coooook.”  Cut to black. The end.

A lot of people were unsatisfied by the ambiguous ending, but I couldn’t breathe for a couple of minutes, in awe over the smartness of the dialogue, the unparalleled performance by Jack O’Connell, and the genius of Cook’s character.  In a cliffhanger cut-to-black ending, I have never felt so satisfied.  While the plot is left uncertain, regardless of Cook’s fate, his character and relationships have been perfectly conceptualized.  His friendship with Freddie and his relationship with Effy — while neither exist any longer, both have been given their dues.

And to satisfy those who can’t take the suspense, and those of us who just can’t get enough Cook, his upcoming appearance in Skins season 7 proves once and for all that he made it out on top.  His two-episode arc, “Rise,” will be the final two episodes of the series.  With Effy also in the mix in season 7, I’m hoping for a reunion.  Although there has not been any talk of crossovers between episodes, I would love to see these two interact in their twenties – because I’m sure those crazy kids have what it takes… and it’s totally not creepy now, right?