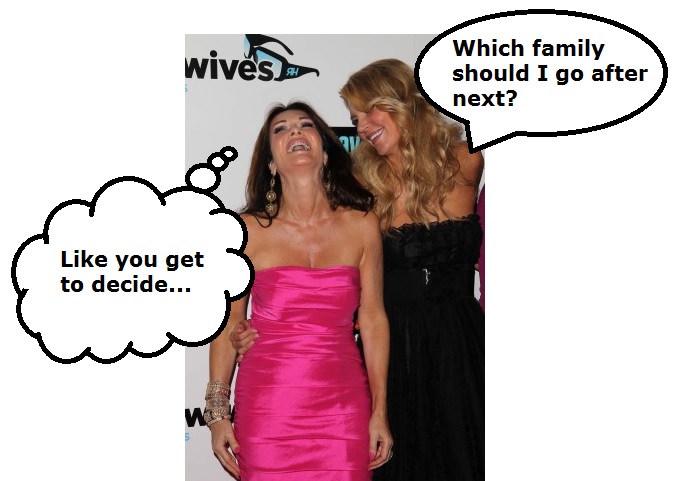 1. Spoiler Alert: Next season’s RHOBH catfight is in the making.  Although the premiere of The Real Housewives of Beverly Hills is still in the distance (they are in the middle of filming), it seems that the ladies’ drama is spilling over into our Twitter feeds. Allegedly, Brandi Glanville and Lisa Vanderpump confronted Kyle Richards and accused Kyle’s husband, Mauricio, of being unfaithful in their marriage. Straight from the horse’s mouth (pun intended), Brandi Glanville swears that she knows first hand that the cheating allegations are true and has proof. At this time, everything is hearsay and Kyle is dealing with the matter privately with her family. The Beverly Hills ladies are known to be a “darker” Real Housewives series, but this has gone too far. What happened to the lighthearted episodes of the women going to lunch, getting Botox, and spending way too much money? Now the women are out for blood and could care less about the people they hurt along the way. Andy Cohen, get these ladies in line or (I hate to say this) you might lose your audience.

2. We need to go back. This past Thursday marked the 3 year anniversary of the Lost series finale.  It’s that relationship we all had that started off strong, we really thought it was the one, but it started picking fights and coming home late, never giving us any coherent answers… and then it ended up in a church. Three years later, we still don’t know what happened, we never got our closure, and we just can’t let go.  Oh remember those days, when it just had so much promise.  It was finishing our sentences for us, calling us cute pet names, and taking creative advantage of cage-like structures.  Even when we thought it was over, it would find its way to our door, scruffy beard and all, begging for us to go back.  Now we are a generation of Lost fans, rationalizing away its erratic behavior.  Oh Lost, you will always be our constant.  It may not have worked out this time around, but see you in another life, brotha.

3. The future beautiful people of the CW are ready for their close up.  Now that summer has started and all our favorite CW shows are on hiatus, what will we do with our time? Last week the CW stars were in Los Angeles to take promotional photographs for the upcoming year. This included the casts of new shows like The Originals, The 100, Star-Crossed, and The Tomorrow People. The CW didn’t leave the fans out of the process and let us take a peek at the shoot on Instagram (@thecw). Basically, the network gave Instagram access to the actors of each show and let them run rampant with selfies and pictures of each other. So, if you are bored this week, take a look. There’s a lot to go through and it sure beats seeing what your distant acquaintances had for lunch in a Lo-Fi filter.

4. Psych gets some work done. This week, Psych had Shawn pitted against his dad, Henry, in a father/son grudge match to prove which one of them is the better detective on a case involving dubious plastic surgeons.  Turns out they work better as a team. Who saw that Full House-esque ending coming? Maybe guest star Aunt Becky (Lori Loughlin)? We love episodes that feature a heavy dose of a Hawaiian shirt wearing Corbin Bernsen, so we are not complaining.  And Gus’ frozen expression after Botox gone awry was just one of the moments that had us making full use of our wide range of facial movement.

5. Summer by Bravo. The much anticipated Bravo summer commercial aired this Monday during the Real Housewives of Orange County. It features all of our favorites from shows like Shahs of Sunset, Top Chef, and, of course, The Real Housewives franchise. In this year’s commercial, the Bravo stars’ yacht crashes on a deserted island leaving the Bravolebrities to survive in the wilderness alone (about as realistic as some of the cast’s implants). It’s the first installment of the video and other editions will come out in later months featuring even more Bravo stars. Andy Cohen is in charge of this crazy crew, and it features the catchy song Fall Down by Will.i.am and Miley Cyrus. If you haven’t turned on Bravo this week, you can catch the video here.