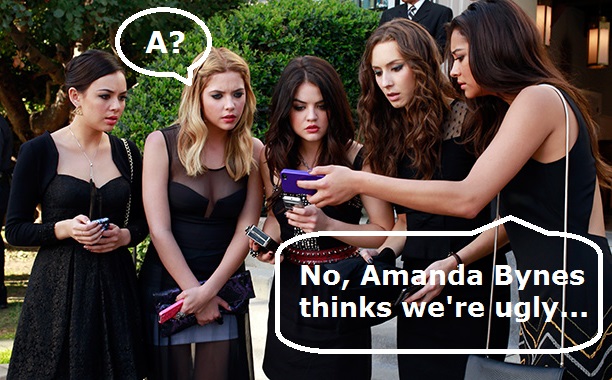 1. How many puns can ABC Family make out of the letter ‘A’ this summer? While so many shows are wrapping up for the summer, Pretty Little Liars is back and crazier than ever.  To refresh — who are we kidding, we have absolutely no idea what is going on. From the summer premiere, we have learned the following: Hannah likes to change hair accessories multiple times throughout the day, which is logical when being stalked by a psycho killer.  Aria’s deer-in-headlights impression is spot on, although she needs to stop looking so shocked by the fact that her statutory rapist could serve some jail time. Mona really, really wants to be friends with Hannah again — or wear her skin as a suit — we can’t really tell just yet.  But, we love it.  Honestly, the black hooded sweatshirt and crazy eyes were doing nothing for Mona’s complexion.  We are happy she has her shopping buddy back, and that she has been added to A’s hit list — and, of course, speed dial.

2. It’s a nice day for a Red Wedding. Two weeks ago on Game of Thrones, we were devastated to see the Red Wedding unfold before our eyes. Even though we knew it was coming, it was very hard to see the Starks lose all power in the north. Rob isn’t a large part in the book series. He doesn’t have his own chapter or voice, and you only hear about his exchanges through other people. However, Richard Madden portrays such a wonderful version of Rob Stark on the HBO series that it was very hard to let him go. So now that the Starks are out, who are you rooting for to take the Iron Throne? Lannisters? Boltons? Targaryens? Martells of Dorne? Tyrells? Let us know! We think the wedding on deck will leave the audience a little happier, but that’s for next season. In the meantime, we will pour a little Ommegang Iron Throne Ale out for our fallen favorite this weekend. Cheers!

3. Roll Call on the Veronica Mars Movie. The Veronica Mars movie begins production this week, and in the midst of the excitement, announcements have recently abounded with news of returning favorites. Percy Daggs III (Wallace) and Chris Lowell (Piz) recently signed on, and Tina Majorino (Mac) was the latest and one of the most anticipated to be announced.  Someone may be in store for a trip to the dentist, with Amanda Noret’s Madison Sinclair back in action, and who could forget the bumbling and lovable public defender, Cliff McCormack.  But, we were most excited by the addition of Francis Capra, who will bring Eli “Weevil” Navarro back to Neptune.  Fingers crossed for yet-to-be-confirmed favorites Ken Marino (Vinnie Van Lowe) and Ryan Hansen (Dick Casablancas). It seems like Rob Thomas isn’t turning any previous stars away — even recurring guest star Sam Huntington (Luke), who we Googled, and it’s legit, he was on the show. On the other hand, we could never forget Max Greenfield of New Girl fame, who was Deputy Leo before becoming Schmidt, and has insisted that he will reprise that role if it means working for free and flying himself to the set. Somehow, we think he could have slow played his hand a little.

4. Brody Jenner has daddy issues. The new season of Keeping up with the Kardashians premiered a couple weeks ago with the announcement of Kim’s sex of her baby. (It’s a girl — future psychiatrists of the world, get ready!) Before another Kardashian daughter is added to the mix, E! decided to revamp the series with some new (male) additions to the cast: the original Jenner clan. Although fans have seen the older Jenner, Brandon, and his girlfriend, from time to time on the show, we haven’t really seen that much of Brody. Why is that? He obviously likes the limelight, as a recurring character on The Hills and star of his own reality show, so why not keep up with the Kardashians? Last week’s episode gave the fans a glimpse into why—Brody has major daddy issues with his father, Bruce. It’s weird to think of Bruce as a negligent father, since he is so good with Kendall and Kylie. However, he did miss crucial years of Brody’s childhood including birthdays and holidays. Not cool Bruce, not cool. Hopefully they will be able to work on their issues and build a healthy adult relationship. On a Kardashian-centric reality television show? Good luck with that.

5. Countdown to True Blood.  As Game of Thrones fans start a long summer of withdrawals (Don’t worry y’all, winter is coming), Truebies are gearing up for what is sure to be a great season, although the excitement has been mixed with some tension over internet rumors that a major character and fan favorite is going to die. For real, die. Not to spoil it, but if they kill this character they will lose at least a few viewers because the thought of watching Bill and his sideburns breathe heavy all summer is not why we keep tuning in.  Luckily, the lead characters of the show are locked into a seven year contract — and the show is only entering its sixth season.  Looks like we have one more year of eye candy, my friends.  Unless HBO is pulling a fast one on us.  But, like that other adapted HBO show that had some fans melting down (A little literary humor: How can you tell if a Game of Thrones fan doesn’t read?),True Blood was a book series first — and, spoiler alert, this person doesn’t die.  Don’t do it, HBO. Don’t. Do. It.